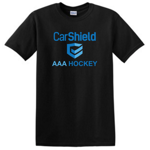 Products ordered will be distributed 7-10 days after store deadline.

CarShield AAA Hockey Club is a USA Hockey and Missouri Hockey sanctioned Tier I Hockey Club located in St. Louis, Missouri.  CarShield offers seven AAA level teams, from U11 to U18. Teams are based out of the Affton Hockey ice rinks and the St. Peter's Rec Plex.  PeeWee and Bantam teams (U11, U12, U13, U14) play a full schedule of AAA level competition, plus a mixture of showcases and tournaments. Midget (U15, U16, U18) teams compete in the North American Prospects Hockey League (NAPHL), a Tier 1 AAA league that hosts showcase tournaments throughout the country.